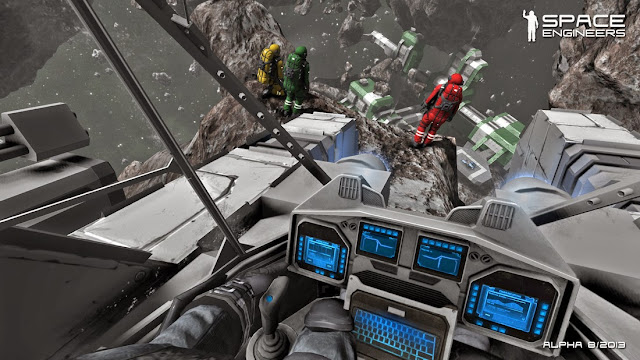 Here's one of the best alpha games I have played yet. Space Engineers isn't just a space sandbox building game, it's a chance to unleash your inner Dr Sheldon Cooper upon the awaiting procedural sandbox. It's many geniuses to tinker with real physics and build the ultimate achievement of their minds. 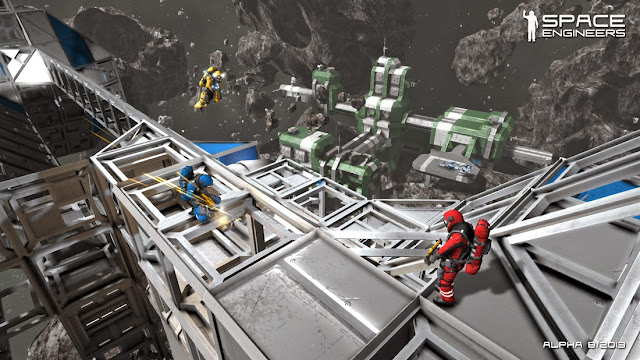 The graphics quality is astounding for an alpha, but be aware. If you build monstrous space stations, your graphics card will be pushing it really hard to keep up with the game. I noticed this when my FPS (Frames Per Second) dropped really low and felt like I was experiencing lag. That said, you can build anything your mind can imagine, given that falls into line with the building materials supplied.

The best way to describe this game is Minecraft meets Star Trek. At this early stage in development, there is only one mode available, but multiplayer is coming. Building is fairly easy, you have three choices of what category you would like to build. Including: 1. Small ship; fairly self explanatory, this is used for building small ships of any kind. Ranging from mining ships, to tram ships attached to docking bridges (one of my creations). 2. Large ships; the big bad looking battleship kinds, or even just the star ship transporters. Your imagination is the limit of what you can build in each category. 3. Space stations; my personal favorite. This is where my creativity ran rampant. Using the blocks to create mega structures that envelop entire asteroids, to mine them with no waste. To my station, which is basically a massive warehouse with a huge docking bridge and a nifty tram transport system running up the center of the docking bridge. 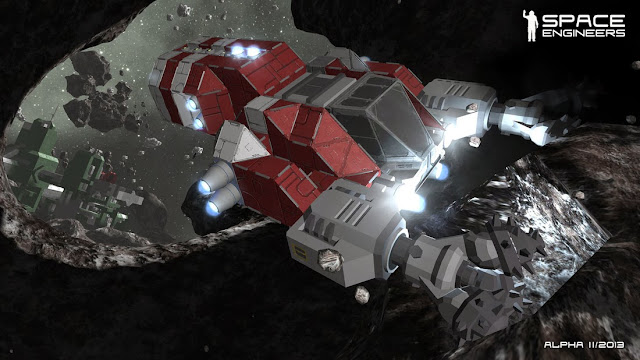 Next, we have the physics system and damage system. The physics based system is one of the best used that I have seen on any alpha. The damage system not only looks really great, but acts as if it should because of the physics system. The two systems in unison create an in depth crash test experience in vacuum, like no other that I've seen to date, an example can be seen below. However, you are a space engineer and fixing is a vital part of your job. When the grinders and welders are added, this will be a fundamental feature of the game-play. Creation is one thing, but being able to fix it when and if it breaks is quite another.

Large sections of ships can be snapped in half during impact. Even two ships becoming one big tangled atmosphere venting death trap, for any inside not wearing a space suit. 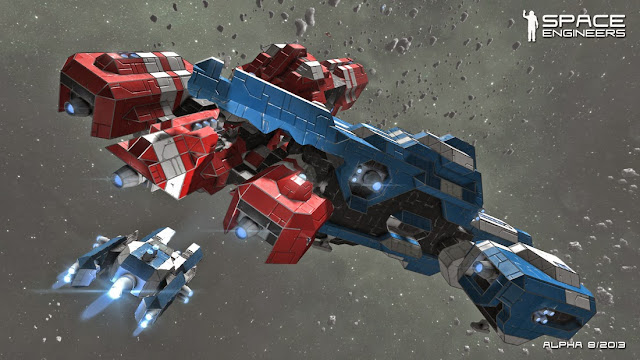 My thoughts on this game are that the developer is heading into the dark void of space with a shining beacon of original thought. Seemingly endless and untapped creative ideas from the developer, and the public who is adding to the gamer creations every day. 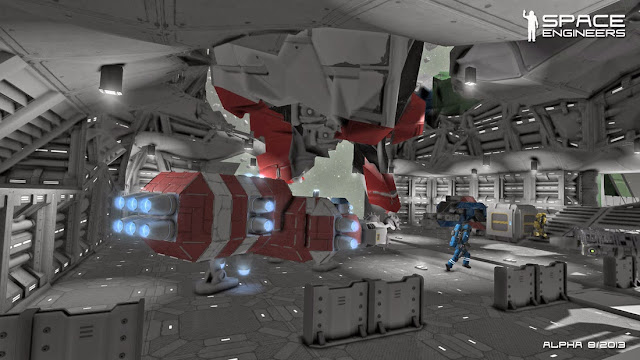 I recently purchased this game from steam for $14.99 USD, but is also available from Desura and the official website; scroll down for the link. This is a great price to take to the stars and create what you mind truly desires, be that megalithic stations like myself or small agile space fighters the possibilities are endless. 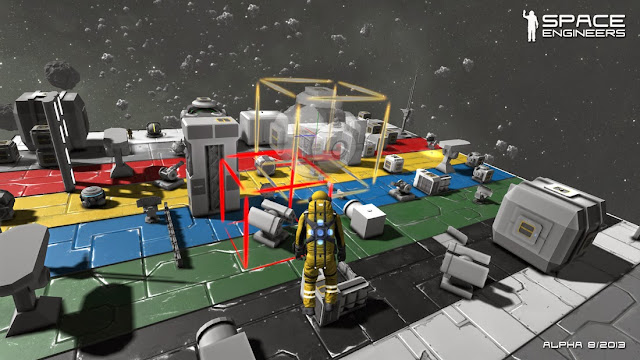 This game is going to be a massive hit with most space fans. We may even see Trekkie's and Storm Troopers working side by side together to create the "USS DEATH ENTERPRISE STAR".

It's an alpha build at this stage, but I recommend people to get involved with good games at an early stage. The retail price is far cheaper at this stage, rather than waiting for a full release. So here is the alpha rating:

http://www.spaceengineersgame.com/buy.html
Posted by Geeky Gamer at 16:09 No comments:

Have you ever wanted to travel to the stars, put your feet on alien worlds or even just experience zero gravity? Then the Kerbal Space Program is the game for you. 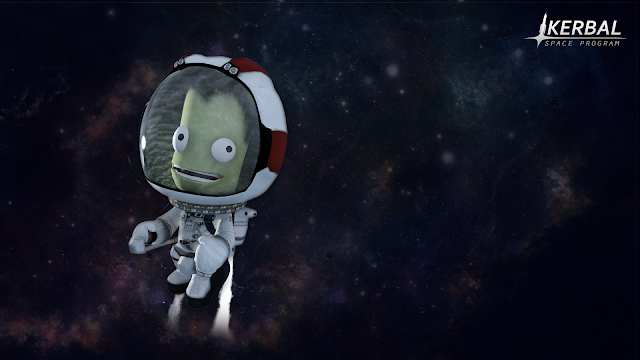 Recently I have been bitten by the space bug, almost going mad with rocket fever and sporting a mad scientist laugh. Building my very own rockets that will carry either; live Kerbal's or drones to orbit and beyond. You'll be able to build anything that you can imagine with the available parts. I must stress, this IS a game that is being currently built and constantly updated. Having said that, this is one of the best space building simulators on the market, based on real physics, which means if it wouldn't fly in reality, it just won't cut the mustard here either. 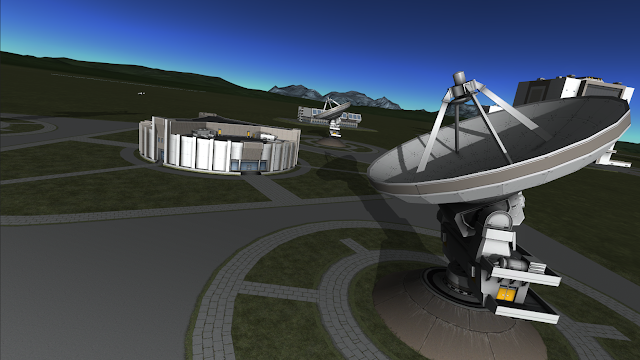 Featuring multiple staging, so you can go higher and faster, eventually reaching a stable orbit after decoupling stacks and booster rockets, that run dry on fuel. Weight plays a huge part in breaking free of the gravity of the Kerbal home world. However, you should be warned, running the engines above 90% long enough will overheat the engines and you will have barbequed Kebal's falling back down on to the launch pad. 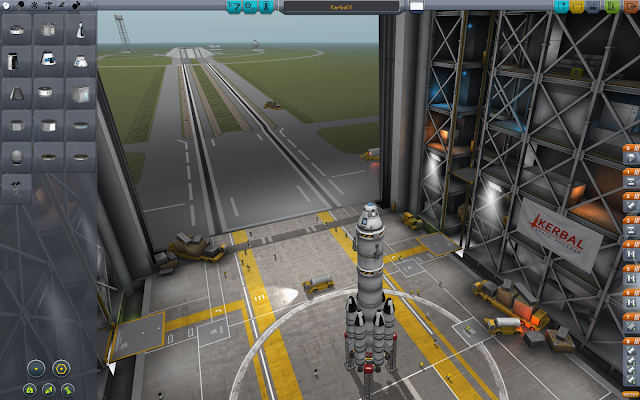 This is not just a game of reaching space, it's about building an entire space program, from building rovers to take to other worlds, to docking craft in orbit to make space stations. It's all within your grasp. Everyone has at least heard the audio from Neil Armstrong's first step onto the surface of, what was at the time, an alien world, our very own Moon. "That's one small step for a man, One giant leap for Mankind", which is true even for the Kerbal's. This would be a giant leap for anybody who managers to achieve this accomplishment, trust me it is every bit as hard for you as it was for NASA and the Soviet Union.

Once having achieved landing on the Kerbal moon (the Mun,) you may want to start to explore the solar system you inhabit. Naturally, there are scientific devices that you can fit to any craft to further the Kebal's understanding of how their universe works, some of these devices are gravity detectors, communication arrays, thermometers and much more. This will be a massive part of the campaign. At this stage, you have the sandbox option to build and do what you desire, with disregard for budgets and mission perimeters. But the campaign offers a learning curve for even advanced players and I highly recommend starting at this point. 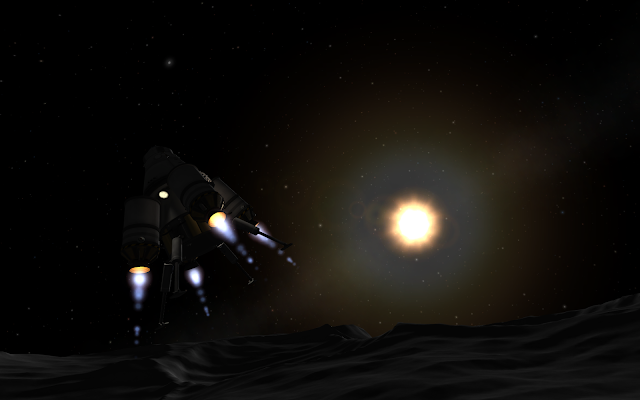 This may look like a space only simulator, well this is not the case as you can build space planes also to return your Kerbalnaughts back from your shiny new space station. In the event of catastrophic failure, you can fit parachutes to the command capsule to return them safely to the planet. 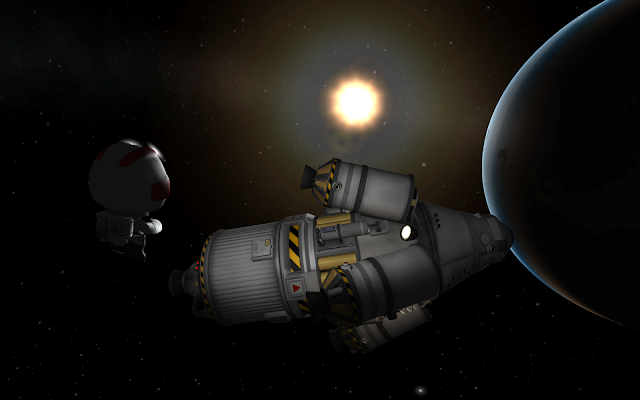 The graphics tie in well with it's main concept of space flight, as can be witnessed in any setting within the solar system. The developer Squad employed a procedural graphics engine, that delivers stunning graphics up close or from orbit. You'll see the tiny blue pearl increase in detail, and even see some mountain ranges from orbit as your craft returns home.

I personally like the feature that allows you to apply and modify, to perform slingshot and gravity braking maneuvers which have been used by NASA, the Soviet Union and the European Space Agency. This WILL make or break mission objectives, being able to set the ship to burn the rockets for the required time to complete the change in orbit. 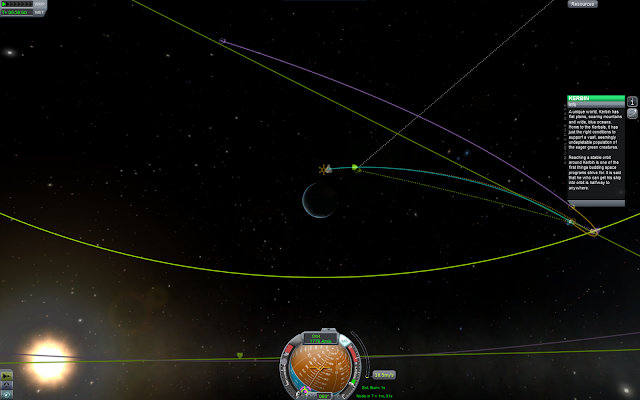 Overall Squad delivered a FUN and exciting game, which you will teach a thing or two you may not have known before about physics or space. Playing around with ideas and finding the rocket setup that is best suited to you is a good experience, and being able to rectify these small issues at an early time in your space agency, will pay off many dividends as you progress to alien planetary exploration.

Squad delivered a great overall game, even though it's still in heavy development. They are allowing the use of, and encourage the sharing of community made mods, be it space planes or rockets and even part packs to expand, the available catalog to create rocket monstrosities of your own to unleash upon the waiting stars.... Will you achieve the Kerbal's ultimate goal, To colonize the solar system and beyond? 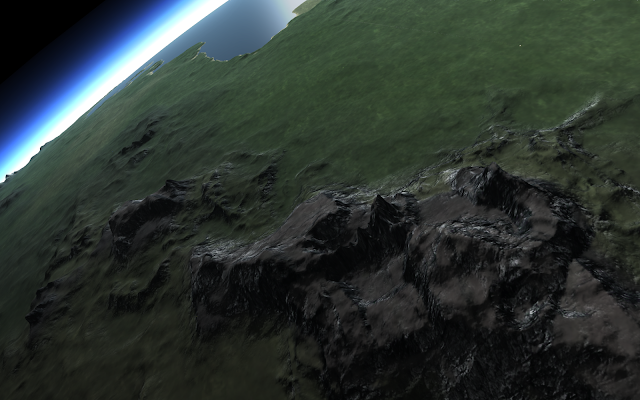 Kid safe and great real world physics, I could not ask for any more out of a good space simulator Not in the vulgar sense in which men do, but finding a bargain, a diamond in the rough, bagging a bargain, and other various motivational one liners that depict my love for shopping. What better way to combine shopping, looking through junk and making a quick faux buck? Pickers is right up your shopping aisle.

If you're a lover of American Pickers, Canadian Pickers, Aussie Pickers or the Antiques Roadshow, you'll simply love Pickers. The aim of the game is to visit various sites such as basements, small country traders, even junkyards, and find hidden gems to sell. You have thirty days to turn over your items via sale or auction within your virtual store. Your goal? To have the biggest turnover at the end of the month. 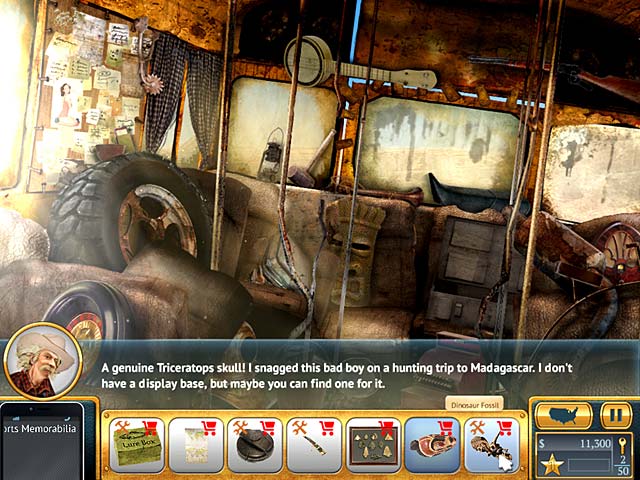 You'll visit sites such as Ray Akins bus, and simply click on items that catch your eye. You'll be tipped off at the start of each new day of picking, to which items are currently trending. If you're able to find seven items that come under that category, you'll receive a bonus that will add onto your turnover. You don't need to grab all seven items at the one location, you can visit any of the unlocked locations in one day. The day coming to a close when you've purchased your seven items, and head back to your store, Rusted Gold. 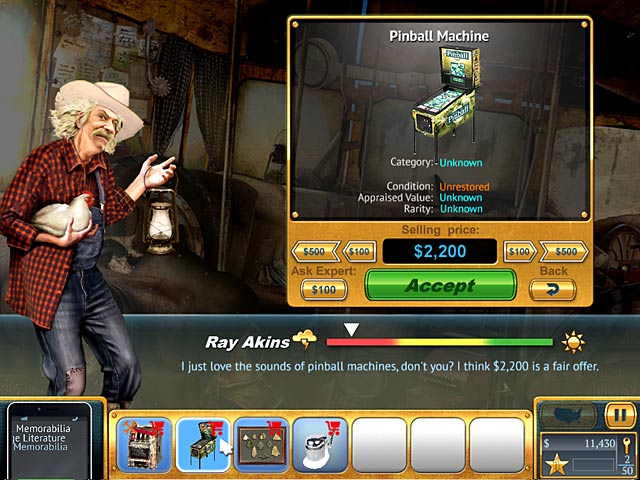 Once you've picked your items, it's time to haggle. Most inhabitants of each location will want top dollar for their wares, but the savvy picker will need to use common sense of what each item is worth. The more purchased at the one location, the more you can haggle for a lower price. You also have an expert on hand, and can ask what the item's possible worth is and how much potential profit it may provide. Some items will be in poor or unrestored condition, but can be restored back at Rusted Gold for a small fee. Incomplete items are popular with the market, but you will need to find both pieces before selling, in order to make a healthy profit. 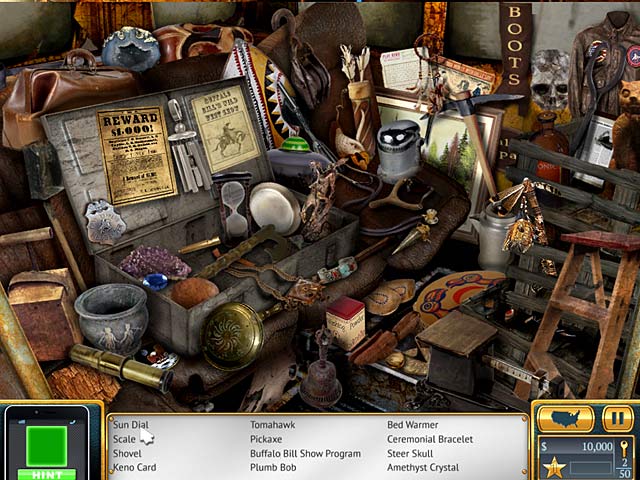 At each location, you'll find mini treasure hunts, such as the one above. Clicking and marking off items on the list provided, and receiving a small finders fee for each piece. Often the end reward is far greater, obtaining a free and often rare item for your store.

Pickers is a simple game that you can save at any point, making it great for those who can't spend hours playing. It's certainly addictive and provides various levels from the amateur or casual picker, right up to the professional level. There is nothing quite like finding a bargain... Even virtually. Even click happy kids will find this entertaining.